The Montana Chamber Music Society (MCMS) takes the stage on July 10th. Comprised of world-class musicians with a long list of accolades and awards including Grammys, Grand Prix du Disques, and Gramophone Awards, MCMS returns again this summer for its 27th performance with the Festival.

This year’s performance will include returning members and maybe even a new addition from their roster of 12 highly accomplished musicians. We’ll update this page when we have a final list of the musicians from MCMS who will perform at the Festival.

In the meantime, you can learn more about the musicians and the Montana Chamber Music Society on their website.

We continue our fan-favorite picks from previous years on July 24th with Helena’s Queen City Swing Band. Formerly known as the Speakeasy Dance Band, this nine-piece band has been performing across Montana for more than 25 years. Beginning with the “Big Band” sound of Stan Kenton, Benny Goodman, Woody Herman, the Dorsey Brothers, and Duke Ellington the Queen City Swing Band has expanded selections to include music up to present day.

As the piano, percussion, saxophones, trumpets, bass and trombone play melody, harmony and rhythm, you will want to tap your toes, nod your head, and make room for a dance floor in the Chapel. That’s what happened the first time they performed at the Festival. We had concert attendees literally dancing in the aisles! You definitely don’t want to miss this fun.

While the group doesn’t have a formal website, if you’re on Facebook you can find them here.

On August 7th, Grammy and Emmy nominated, Montana-native keyboardist and composer, Phil Aaberg, will once again share his compositions that evoke the spaciousness and beauty of the Western landscape. After earning a Leonard Bernstein Scholarship and Harvard National Scholarship at Harvard College, Phil graduated with a Bachelor in Arts degree in music. It was then time for him to head west again to explore the San Francisco blues scene. In San Francisco he joined the Elvin Bishop Group, with whom he toured and recorded several albums.

Phil’s wide range of abilities has garnered him guest appearances on over 200 albums and concert tours with artists as varied as Peter Gabriel, John Hiatt, Kenny Rogers, and the Doobie Brothers.

Upon signing with Windham Hill in 1985, Phil leveraged his eclectic background to produce a series of solo albums that show off his rigorous keyboard technique, diverse influences, and colorful compositional style. In 2000, he began his own record label with his wife Patty — Sweetgrass Music — through which he has since endeavored to produce music that “connects a global audience to the landscapes of the West.” Throughout his career, Phil has produced music that consistently translates Montana’s farms, ranches, and native cultures into musical concepts and has forged a unique keyboard style that paints an audible portrait of his home state.

Discover more about this amazing Montana musician on his website. 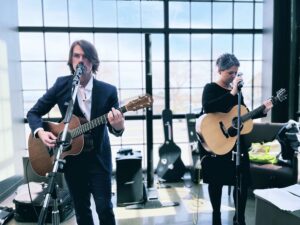