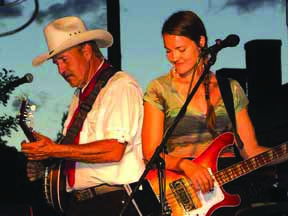 Rob Quist is an award winning American singer songwriter and published poet, and has toured nationally and internationally, releasing 15 CD’s of mostly original music. He was lead vocalist and principal songwriter for the Mission Mountain Wood Band, labeled the best band ever to come from Montana, and later formed his own band “Rob Quist & Great Northern. The major stars Rob has shared the stage with reads like a “Who’s Who” in American music and his original songs have been recorded by Michael Martin Murphey and Loretta Lynn, to name a few. His awards include: a nomination for “Best Country Voice” and winner “Best Country Band” for the Nevada Music Awards; “Song of the Year” for the Texas Music Awards; and “Governor’s Award for the Arts” in Montana. Quist was one of the first honorees to be inducted into the University of Montana School of Fine Arts Hall of Honors, saluted as “a celebrated Montana musician and composer who has captured the spirit of the West in his music, an evocative and versatile artist whose gift of song has touched the hearts of his countrymen, an elequent proponent of the history and beauty of the West whose legacy in song will be embraced by generations to follow.” www.robquistmusic.com

Halladay Quist was born and the next day she was on the road with her father, experiencing a world that would set the stage for her distinctive songwriting, voice and unique musical talents. ‘Within Halladay’s sultry angelic voice lies a lion’s roar of love, compassion, earthiness and story-telling.’-406Woman. A multi-instrumentalist (guitar, stand-up bass, banjo, ukulele, piano), Montana’s rising daughter brings to the stage a sultry vocal blend of country, bluegrass, folk rock and blues in her own original music appealing to a broad range of audiences throughout the northwest and has appeared on stage with highly accomplished and award-winning artists like Jewel, Michael Martin Murphey, Collin Raye, Colter Wall, the Doobie Brothers, Dennis Quaid and the Sharks, and Berry Oaks Jr.  In her free time she is passionate about education, working with foundations like The Red Road and Share Your Voice, to empower children of all ages to use and share their voice with creative arts based summer and in-school programs. 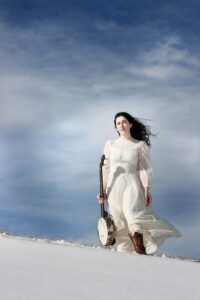 Growing up down the road in Philipsburg, Montana, acoustic/folk musician Coty Hogue is a singer and multi-instrumentalist whom Grammy nominated Alice Gerrard has called “an impressive young talent.” Her unique approach to using the banjo to accompany the songs she sings synthesizes traditional styles while nodding to contemporary influences.

Coty has released three albums and been featured on BBC radio and Sirius XM satellite radio. Her rendition of the traditional song ‘Going to the West’ charted #1 on the FOLK-DJ radio charts and another, “Oh Wind” is featured in the independent film, Neon Sky. Performing throughout the Northwest with her trio, featuring Aaron Guest and Kat Bula, listeners can expect tight harmonies and inventive instrumentation featuring original and traditional songs.

Michael Louis Aaberg is an Oakland Native producer, musician and educator.
He’s the producer behind Goapele’s ‘Closer’ and her musical director. He’s played keys and recorded for Lalah Hathaway including her Grammy winning Live record. He’s featured on Derrick Hodge’s “Color of Noize” and Ambrose Akinmusire’s “Origami Harvest” on Blue note Records.  He has started his own label Tiger’s Eye Music and his debut, “ Slept On” is available on Bandcamp only. Michael resides in the Bay Area with his wife and daughter.